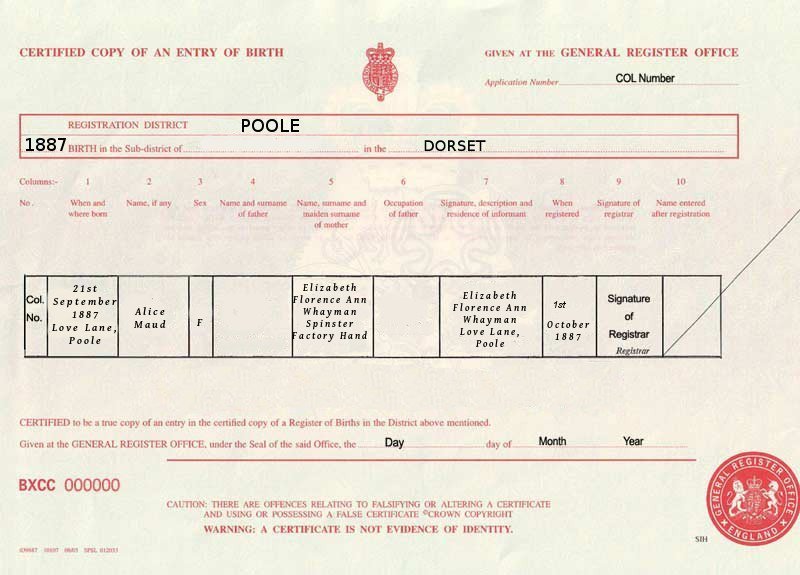 This is a general reference blog post. We cannot provide advice about how to find a birth certificate. You can of course commission a qualified genealogist to undertake research on your behalf. To hire a genealogist for assistance with small projects, visit this link for Per Hour Research.

When I began my family tree research back in the 1980s, I heard it said frequently, by more experienced genealogists, that if I could not find a birth in the GRO indexes, it was because the child was not registered.

A few years later, with more experience under my belt, I still heard the same words echoing between the bookshelves, lecterns and corridors of the Family Records Centre. By then it would raise a smile. I knew that on rare occasions this was actually true, but for the majority of scenarios not true. Thirty years later and having researched 1000s of individuals I can reiterate that it is very rare indeed.

So why can’t you find that elusive birth record? I am reminded of something I heard in a lecture just last year, the record does not exist or you are looking in the wrong place.

Okay this admits that sometimes records do not exist or no longer exist, but what about looking in the wrong place? I would wager this is the most likely answer to your question. In fact this was the reason why I would smile when I heard the ‘they weren’t registered’ answer because I thought it was more likely that the researcher was not wearing their logic hat!

As an example, I want to discuss Alice Maud Young. Alice Maud Lacey married Walter Edward Young in Poole on 3rd August 1908. Her father was shown on her marriage certificate as George Fred Young. This was odd because she was single and had not been married before.

A search through the 1901 Census for alice+young+1887+/- 5 years etc. did not deliver any relevant results, but a search for Lacey and variants found a family residing at B26 Skinner Street, Poole. At the head of the family was Fred G. Lacy aged thirty-four and with him was his wife Annie aged thirty-two, Alice aged thirteen and several other children. It was strange that Alice should name her father as George Fred Young on her marriage certificate and not Lacy.

A researcher may look at a document such as the 1891 Census where the Lacy family were recorded and regard them just like any other family unit without suspecting that all is not what it seems. In fact it clearly shows a family in Church Street, Poole headed by general labourer George F.Lacy, his wife Annie, their three year old daughter Alice M., and baby son George F. Lacy.

In this instance, it was first necessary to look at the GRO birth index records for Alice Maud Lacy/Lacey’s siblings. Thankfully there was a common name shared among them with regards to the mother’s maiden name:

If the mother’s maiden name was Harris, was Alice Maud born or baptised a Harris? No was the result from the respective searches.

At this stage it was useful to know when Annie or Elizabeth Annie Harris married George Fred Lacy. Now that the mother’s maiden name was known thanks to the GRO birth indexes, finding a marriage would be easier. Indeed, George Fred Lacy married Elizabeth Annie Harris at St. James church, Poole on Monday, 17th February, 1890 after the reading of banns.

Given the date of the marriage, Alice Maud did not appear to be George’s daughter, but whose daughter was she? A random search of Dorset,England, Church of England Births and Baptisms, 1813-1906 at Ancestry.co.uk using the search terms Alice+1887(+/-2years)+Poole+Annie (and variants) resulted in the following entry:

This was worth investigating further. The GRO birth entry for this child was indexed under the name of Whayman and while waiting for the birth certificate, the 1881 Census was searched for an Annie Wayman. One result of interest was Ann Whayman aged thirteen who was born in Lytchett Matravers and was living with her widowed mother Emily at West Butts Street, Poole. Emily had two further children in the house to fend for: eight year old Joseph Whayman and one year old William. A birth search revealed a Joseph Moore Whayman born 1873 with the mother’s maiden name of Harris and a William George Whayman with the mother’s maiden name of Pope!

The surname Harris linked this family to the Elizabeth Annie who married George Fred Lacy.  And with the arrival of the birth certificate for Alice Maud Whayman, further proof was added to the argument.

Alice Maud Whayman was born at Love Lane, Poole on Wednesday, 21st September, 1887 the daughter of Elizabeth Florence Ann Whayman a factory hand. This birthday was exactly the same date Alice Maud Young provided on the 1939 Register and is good corroborating evidence to suggest they were the same person.

So if you cannot find a birth record, do not instantly think the birth was not registered. Use logic and consult as many census records and birth/baptism records as possible. Do not neglect a person’s siblings if you find them as one family unit. More importantly, and we are forever saying this to our ‘I’m stuck’ clients, do not neglect the mothers in your search – they may hold the key to the mystery!

This site uses Akismet to reduce spam. Learn how your comment data is processed.

This website uses cookies to improve your experience while you navigate through the website. Out of these cookies, the cookies that are categorized as necessary are stored on your browser as they are essential for the working of basic functionalities of the website. We also use third-party cookies that help us analyze and understand how you use this website. These cookies will be stored in your browser only with your consent. You also have the option to opt-out of these cookies. But opting out of some of these cookies may have an effect on your browsing experience.
Necessary Always Enabled
Necessary cookies are absolutely essential for the website to function properly. This category only includes cookies that ensures basic functionalities and security features of the website. These cookies do not store any personal information.
Non-necessary
Any cookies that may not be particularly necessary for the website to function and is used specifically to collect user personal data via analytics, ads, other embedded contents are termed as non-necessary cookies. It is mandatory to procure user consent prior to running these cookies on your website.
SAVE & ACCEPT